As I write this it feels as though the world is being turned upside-down, and we have no idea how long it will last. The Coronavirus catastrophe is playing out like a dystopian novel with closed borders, and everyone being told to stay at home - to self-isolate. Where better to do it than in Eyam in Derbyshire, England, the village that practically invented the concept of self-isolation? 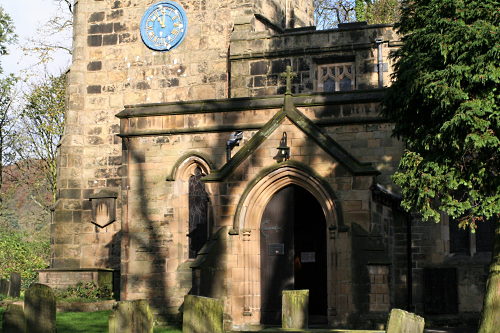 Eyam lies in the middle of the beautiful Peak District National Park in the north of England, about 7 miles north of the market town of Bakewell (famous for the Bakewell pudding). It nestles behind Middleton Dale, on a limestone plateau. The 14th century church has Norman pillars and an 8th century Anglo-Saxon cross in the churchyard. But the village is most famous for the self-sacrifice of its residents during the time of the bubonic plague which raged in England from 1665 to 1666.

350 years ago Eyam was fairly remote, and was approached by rough tracks, some of which still exist. From the middle-ages onwards the dreaded bubonic plague would flare up sporadically in villages and towns around the country, in some cases the smaller ones being extinguished completely. The two dates that most people know from British history are 1066; the Norman invasion, and 1666 for the Fire of London which put an end to the Plague of London the year before. But there were many such instances in London and elsewhere, and at various times.

One such outbreak was in Eyam in 1665, and gave rise to the story which was made popular in the 19th century. It had been a long, hot summer, and a widow called Mary Cooper took in a travelling tailor called George Viccars. At the end of August a box of cloth from London was delivered to the tailor, but the contents were damp and so the cloth was laid out to dry. Shortly after this George Viccars became ill. The most likely explanation is that the cloth had trapped some infected rat fleas which had survived the journey. They were then able to escape when the cloth was unpacked, and the hungry fleas were not fussy about which mammal they used as a food source. Apparently nobody made the connection between the flea bites and his death a few days later. He was buried the following day, September 7th, 1665.

At this point, to the villagers of Eyam, this seemed to be the end of the story. But a couple of weeks later one of Mary Cooper's two sons died, followed the next day by a next-door neighbour. A couple more days passed before the neighbour on the other side died, followed a few days later by his wife and a woman from the other side of the road. At this point I imagine there was a dawning and horrified realisation that there was a serious problem.

One can draw parallels to the present day, as we watch the daily toll of Coronavirus rise exponentially around the world, during March 2020. In those days the mechanism of infection was not fully understood and the disease was incurable - it would be another 250 years before modern antibiotics were available. The resulting fear provoked all manner of supernatural explanations, such as the assertion that it was a Divine punishment for past sins. Many villagers must have wanted to escape, although only the wealthiest would have had the means. Many would have spent their entire lives within a few miles of the village.

The month of October brought more deaths with, as now, an increasingly depressing tally as the days passed. The winter months reduced the death rate a little because the disease survives less in the cold. But rats, along with their fleas, would find warmth and food in the houses of villagers, without them being aware of either their nests, or their role in transmission. By May the disease seemed to have subsided, and the villagers must have believed the worst was surely over.

With infectious diseases it can often seem as though a corner has been turned, only to then face a second wave of infection. This might be due to a relaxing of whatever controls have been imposed, or just due to the unpredictable nature of any system that exhibits positive feedback. In the case of viral pandemics it can also be due to a mutated form of the virus. Whatever the reason, the rates of bacterial infection increased sharply in June. At this point, many of those with the resources to move out of the village did so. But the Rector, William Mompesson, decided to stay with his wife, out of a sense of duty.

In June 1665 Mompesson, along with his predecessor Thomas Stanley, who lived in the village, decided to act. They proposed that the village dispose of the corpses of the dead quickly and without ceremony. They also decided to stop holding services in the church and instead have open-air services - a kind of social distancing in a time when the manner of disease spread was not at all well understood. It was considered that the safe distance between strangers was about 12 feet (4 metres) - a little more than the 2 metres that is currently being recommended. And so the limestone outcrop of Cucklett Delph became the new location for the congregation, with its natural stone pulpit, which you can still visit today.

Finally, they decided to create a cordon around the village so that the disease would not spread to neighbouring villages and settlements. In other words, the entire village agreed to "self-isolate". This was a truly heroic decision which introduced numerous practical problems, in addition to having to take their chances when they must have longed to escape. For example, there were supplies of food and other provisions that were needed. The Earl of Devonshire, from his home in nearby Chatsworth House, arranged for provisions of food and whatever rudimentary medical supplies existed in those days. They were to be left for collection at the boundary of the village, like the Amazon delivery driver leaving a package and stepping away while you collect it.

Some goods required payment, and these were exchanged at the now-famous boundary stone to the east of the village. You can still see this large sandstone rock, with the holes drilled into it where coins were left in puddles of vinegar as rudimentary disinfectant. A few other delivery points were used, including what is called Mompesson's Well, where coins were left in running water, in the belief that the cause of the plague, whatever it was, would be washed away. It probably worked.

Ultimately the quarantine was effective. There were no infections outside the village. But in the village itself there was terrible loss of life. In July 1666 there were 56 deaths and a further 78 in August, including the Rector's wife. In all 260 people died in the village and as few as 83 survived, in addition to those who had left before the isolation took effect. It must have been a miserable existence with little contact with the outside world; no Netflix, no Amazon, no Microsoft Teams; just a stone with some holes in it. Eventually, towards the end of the year, the plague subsided, perhaps starved of susceptible victims. Life began to return slowly to normal, but there must have been little in the way of celebrations as Christmas approached.

We now know that bubonic plague is an infection of the lymphatic system caused by the bacterium Yersinia pestis. The bacterium is passed from rats to humans by rat fleas. It is believed that the plague, like Coronavirus, originated in the Far East. Bubonic plague can now be treated with antibiotics, and has been largely eliminated by better hygiene. But the world population is still vulnerable to new strains of viral infection as we are seeing currently, and antibiotic-resistant strains of bacteria are also a concern. When the current pandemic passes, as it eventually will, we may well decide to modify the way we travel and interact. At the time of the Black Death the fastest a disease could travel was in a horse-drawn coach. Now we can be on another continent within hours, along with any pathogens with which we happen to be infected. Perhaps we'll do a little bit more virtual meeting, and a little less travelling, in the years to come.

But while many of the details of the story of the "plague village" of Eyam, and more generally the progress of bubonic plague in the 17th century, resonate with the current crisis, every pandemic is different. It is very difficult to predict its course, or its effects on society and the way we live and work. Søren Kierkegaard said that life can only be understood backwards, but it must be lived forwards. The same can be said about pandemics.

And remember, when it comes to Coronavirus, #CaringIsNotSharing.